Apple has released iOS 10.3.3 for iPhone, iPad and iPod touch to the public today. Six betas of iOS 10.3.3 were rolled out to developers and the public before the final version launched. The previous iOS update — iOS 10.3.2 — was released on May 15th. Like iOS 10.3.2, iOS 10.3.3 is also a minor point release update with bug fixes and security improvements for iOS 10.3. And the larger iOS 10.3 update contained noteworthy features like a revamping of the file system, a Find My AirPods feature, Wi-Fi Calling on iCloud devices with Verizon, an Apple ID Settings menu, a Podcasts app widget, weather forecasts in the Maps app, an iCloud storage meter and new app animations. So lets get started to Download iOS 10.3.3 for iPhone 5, 6, 6s, 7, 7 Plus.

And in early June, Apple hosted the Worldwide Developers Conference (WWDC) where iOS 11 was announced. So Apple is unlikely going to be adding any major features to iOS until iOS 11 arrives in the fall.

Also Read: Some Android Features Which Are Missing From iOS 11

While iOS 10 emphasized improvements on Apple’s stock apps and the Lock Screen, iOS 11 will be known for productivity features, especially for the iPad. The iPad will support more app icons in the dock, a new slide over feature, drag-and-drop, a new App Switcher interface and a Files App.

iOS 11 features also include a redesigned App Drawer and Control Center, action syncing for Messages across all devices, the ability to make payments through Messages, real-time language translation through Siri, editable Live Photos, indoor mall and airport maps in the Maps app, a Do Not Disturb feature that can be automatically activated while you are driving, speaker support in the Home app, an AirPlay update for multi-room audio streaming, revamped Apple Music profiles, an App Store app overhaul, a document scanner feature in the Notes app, a one-handed keyboard mode, a screen recording feature, an automatic setup for new devices, ARKit for facilitating augmented reality apps by developers and much more.

Also Read: How to Get MacBook Pro like Touch Bar in Any Android Device

Apple did not provide much information in its release notes. However, the iOS 10.3.3 beta revealed some of the details. iOS 10.3.3 has only one visible change: new wallpapers for the 12.9-inch iPad Pro. There will likely be one more minor iOS 10 update with bug fixes before iOS 11 arrives.

The release notes of iOS 10.3.3 simply say: “iOS 10.3.3 includes bug fixes and improves the security of your iPhone or iPad.” Once I find out more specific details about the update, I will update this article.

The download size of iOS 10.3.3 update will vary based on the device and carrier you have. But it appears to be between 80-100MB. 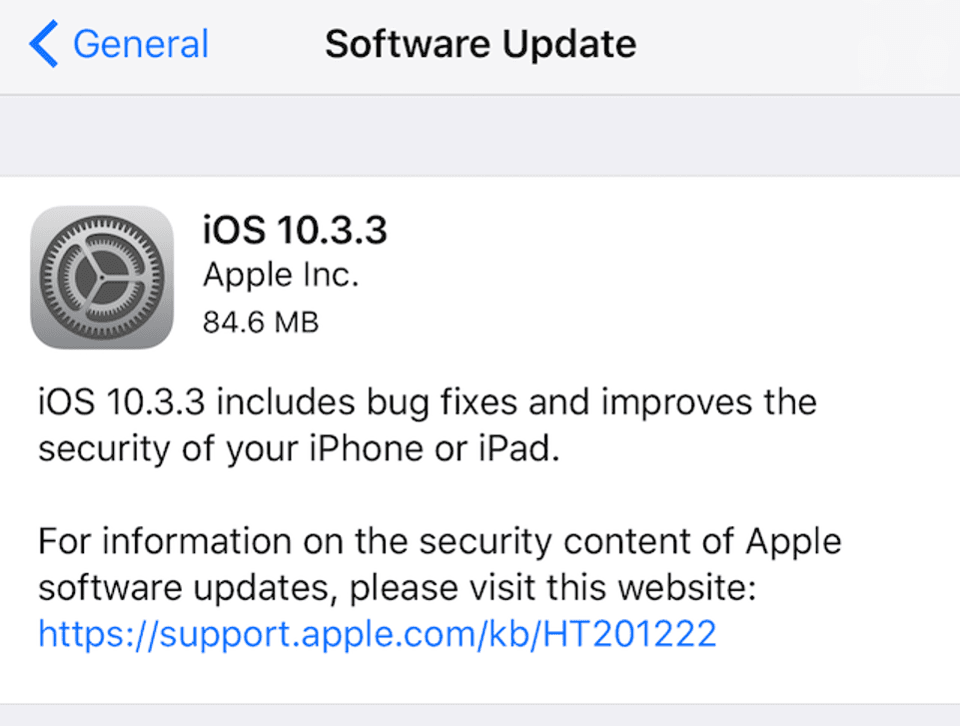